Vaccine Mandates Can Be Contagious

Why Everyone Should Help Repeal SB 277,
the New Forced Vaccination Law in California

I don’t recommend the flu vaccine, because there’s no significant benefit, and most formulations contain mercury. When patients ask me about the Gardasil (HPV) vaccine for their children, I explain that there is a 0.0% chance of their daughters getting or dying from cervical cancer before the age of 20. That getting a pap smear and an HPV test is the best way to prevent cervical cancer in sexually active women. And also, that the incidence of cervical cancer has become so low through these latter measures that annual pap smears haven’t been recommended since 2013, and the HPV test is only recommended after age 30. This information didn’t stop Rhode Island from mandating the flu and HPV vaccines for school attendance. Nor did it stop California from passing a law in 2012 which allows children ages 12-17 to receive the Gardasil vaccine without their parents’ knowledge or consent.

On June 30th, 2015 Governor Jerry Brown signed SB 277, a law that took away every child’s right to attend public or private school in California unless they are vaccinated with 10 different mandated vaccines (34 doses by kindergarten). Vaccine mandates for school attendance are not new or a surprise. However, since 1961, parents’ rights were protected and they could opt out of a given vaccine for their children, thanks to a law passed by Governor Pat Brown, the current Governor Brown’s father.  SB 277 removed the personal beliefs exemption and religious exemption that have been available to children in California for over 50 years, for attendance in both private and public school.

SB 277 doesn’t yet mandate the flu or HPV vaccines — yet a provision in the law includes a blank check for the State Department of Public Health to mandate any other vaccine in the future. And, the most ridiculous news, is that even babies and children are now required to be vaccinated against Hepatitis B (which in the USA is almost exclusively transmitted through sexual activity or IV drug use) in order to attend daycare or preschool. The hypocrisy of the new law is that children who actually have Hepatitis B can freely attend school, but healthy children who have not been vaccinated against Hepatitis B are illegal in school. Clearly, this has nothing to do with medicine or health, and everything to do with politics.

An internet search can quickly help you learn the risks of any medical treatment, including the risks of vaccinations, but I won’t go on about that now because I don’t think most people care about risk if there is no benefit to a treatment in the first place. (However, as a menopause doctor, I have to share with you that there have been cases of premature menopause in young girls receiving the HPV vaccine.) Correspondingly, if a treatment is perceived as life-saving, people are willing to accept great risks, and don’t want to hear any stories about government corruption. And, rightfully so, nobody cares about another person’s medical freedom if he or she believes that person is a threat to his or her life.

The problem is, for whatever reason, the media and public health departments tend to grossly exaggerate the deadliness of diseases, embellish the benefits of vaccines, and minimalize the risks of vaccination. For example, SB 277 was urgently passed in California in response to the propagated fear which was triggered by 134 measles cases that started in Disneyland in Dec 2014. However, between 1950 and 1960, the lifetime risk of dying from measles in the USA was already 1 in 330,000 (average 0.3 deaths per 100,000 population; Table 64 & Figure 19). And in 1962, the year before the first measles vaccine started being used, the death rate from measles in the USA was about 1 in 500,000 (0.2 deaths per 100,000 population), during a time when there were an estimated 3-4 million measles cases occurring annually. With 408 measles deaths recorded in the USA in 1962 (most cases being in children 2 years old and under) that means the case fatality ratio at that time was about 1 in 10,000 cases, not the 1 in 1000 that the CDC claims. In California specifically, the risk of dying from measles in 1962 was about one in a million (0.09 deaths per 100,000 calculated from 16 deaths in population of about 17,000,000; Table 1-24). As a comparison, you have more chance of dying from a lightning strike nowadays than you did of dying from measles over 50 years ago, when almost everyone had a mild case of measles before the age of 15. This Brady Bunch clip pretty much depicts a typical experience with the measles. 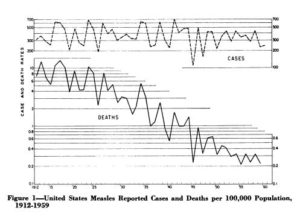 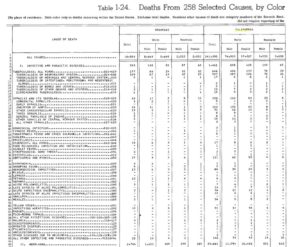 Yes, the incidence of measles in the USA has decreased dramatically since the introduction of the vaccine in 1963, but the point I am making is that it wasn’t the measles vaccine that dramatically reduced measles death rates. The media publicizes that over 146,000 persons die from measles every year. This is true, but that’s in the third world, where also diarrhea kills about half a million children under the age of 5, every year. And, although these numbers are painful to think about, they don’t extrapolate to the USA, or justify alarm about measles in the USA. And they certainly don’t justify removing the personal beliefs exemption in California, where already about 97% of parents voluntarily administer all mandated vaccines to their children.

Alongside thousands of other outraged parents across California, my husband and I have been helping the SB 277 Referendum effort which is an attempt to repeal the law by putting it on the 2016 November ballot.  The 90 day referendum period, which requires about 400,000 registered voters in California to sign a petition, is almost over. If SB 277 doesn’t get on the ballot, the law will go into effect on July 1, 2016. And, if it doesn’t, yes there will be lawsuits, but it will likely take years for change to occur through the courts. We now only have a few more days (until September 27, 2015) to place SB 277 on the Nov 2016 ballot, and I hope you can help.

Repealing the law by vote of the people will send a clear message to the rest of the nation that, no matter how good vaccines claim to be, no good is done by coercing parents to vaccinate their children against their better judgment. The threat to the loss of freedom and personal liberties is more dangerous than any disease we face. This is a battle about the right to think and decide for oneself and one’s own children what medical risks we are willing to take with our own bodies.

I know those of you that could signed the petition at my office, but if you haven’t, please go to your nearest signing location and sign the petition. Or, if you aren’t a registered California voter or can’t sign for any other reason, please consider donating to help pay for the paid petitioners. There is a very informative one minute video on the SB 277 Referendum donation page that I can encourage you to view and share: https://www.gofundme.com/SB277Referendum

Vaccine mandates are contagious, but there is an antidote.
Please help us stop SB 277 now, before more draconian vaccination laws  spread to adults in California, and the rest of the USA. 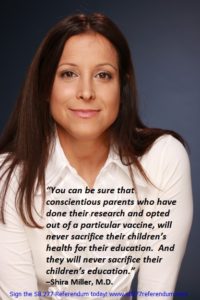 Below are the current CDC recommended vaccinations for children. SB 277 doesn’t yet mandate vaccinations against influenza, rotavirus, pneumococcal, Hepatitis A, meningococcal, or human papillomavirus (HPV) infections. However, there is a provision that SB 277 can add them or any other vaccine at any point. 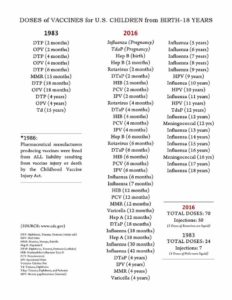